I am delighted to have been asked to represent Region 2 (South East) of the Quilters Guild in the Festival of Quilts Gallery ‘In The Spotlight’ – for up and coming quilters.

When I accepted, I had not realised there would be a theme – I have been so focussed on working on my dementia series that I felt I might not be able to rise to the challenge! However, having accepted I thought it would be ungracious to pull out.

The theme is Alice In Wonderland, next year being the 150 anniversary of it’s publication – yes 150! I had not realised it was that old either. I considered making patterns with hearts – that would be fun – then making mazes – that would also be fun. But neither of these ideas really represents me as an artist.

Then I heard about Alice in Wonderland Syndrome – a condition associated with migraine that Lewis Carroll may have suffered from and the effects helped him create some of the more outlandish adventures, including the tunnel and the shrinking room. So I have decided to use this to look at conscious and unconscious, creating a work using familiar materials such as transparents.

Layering up 4 black circles in decreasing sizes in loose suggestion of tunnel, or a rolling ball as one sufferer described her experience of the sydrome’s sypmtoms. But also representing the consious and unconscious.

Scaling up was a simple matter – I thought! Make a stencil from newsprint and draw a circle. The large circle was going to have to be around 80cm so I pinned into my design wall and drew a circle using a thread and pen. 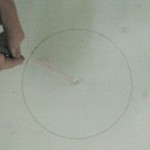 Cut out and then paint black acrylic on to sheer polyester voile. 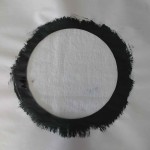 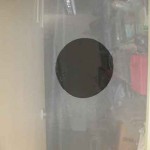 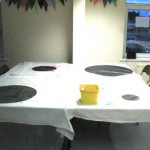 So I spent a happy day on Sunday printing circles. In fact I printed 6 circles not 4 – I failed in my attempts to get clean prints on 2 circles and had to repeat. But I have to have samples to try out the stitching on – right?

And I got left with some interesting papers to play with for another project perhaps…. 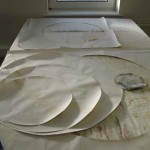 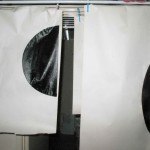 Next stage – stitching – trying out some words on dissolvable fabric – more pics next time.