I finally completed my MA in September and the display included these plaster casts of empty pockets which I used as a metaphor for absence and to illustrate the remains or traces of a person revealed by dementia.

Having spent so long discussing why pockets (my father had empty pockets during his final years), I felt that I needed a slight change and wanted to focus more on the one thing that is found in pockets and handbags of dementia patients: handkerchiefs. I sent out a call on social media and whenever I did a talk with a quilting group, for donations of ladies handkerchiefs – I had cast a lot of trouser pockets and wanted to adjust the gender balance somewhat.

I was given beautiful lace and embroidered hankies, as well as printed colourful ones. I have a wonderful collection now and material for several hangings.

So I started to experiment – first of all sorting – very important as a delaying tactic! It took me a while to pluck up the courage to work with these gifts from people, even though I had been very clear that I would be ‘destroying’ them in the process of making something new.

I have 2 on the go at the moment: one is embellished and is really meant to be a sample, though I am rather enjoying the embroidery I am doing on it – more on that one once I have progressed to a more substantial piece. The second is a hanging where I combined all the printed hankies with those classic stripes all round the edges which make up a hankie which I thought, looked rather like a ready made 9-patch.

I had been wanting to cut up and reconstruct words for a while, suggesting fragmenting memories and language. So I organised 9 hankies into a further 9 patch and wrote on them in dye using 2 different tools. 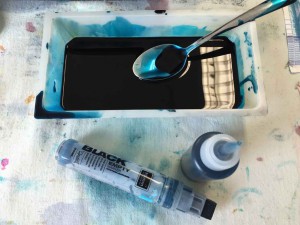 To use some kind of structure for the cutting and re-assembly I thought about the relevance of the ‘disappearing 9 patch’ block and how that linked to the disappearing person and their relationships. So I decided to pursue that thought – but to try it out on paper first

I had thought that I would follow the pattern of reconstructing the format of the original hankies and having trialled it on paper, I then tried it with the fabric. By this time I had decided that I would bond the hankies on to a white background, and as they were all different sizes I positioned them unevenly within regular squares to give some larger and smaller gaps. But when I reviewed the fabric version, I decided that it was still giving an image which was too regular and organised. So I went random – literally. I turned my pieces of paper over, juggled them up, and then turned them over one by one. 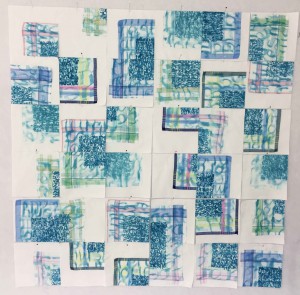 This is what I ended up with – after a couple of tweaks!

But it was all looking rather clean and fresh – I needed it so look older, worn, tired. So I have just got to the stage of doing flour paste resist on it.

First of all covering the whole top with flour paste, letting it dry, scrunching it up randomly (I did ponder whether to follow the grid nature of the piecing for the scrunching) and then painting India ink on. This last process I did do in a sort of random grid as I wanted some of the gaps and hankies to have no marks.

This last bit is really difficult to get right – too much or too little is hard to judge. You can only tell from looking at the back but with 2 layers of fabric and bondaweb in the mix even that is not any indication of what might show on the right side once it is washed off.

So now its a long and agonising wait to let the India ink cure sufficiently that it does not lift off with the hot soda which I use to soak off the flour paste. And then….do I mono print or laminate….?