This is the last post on the Alice in Wonderland piece until I show the work at Festival of Quilts in the NEC this year. It is nearly finished…..and I probably wont be able to see how it hangs until it is actually up and on display.

The story so far.. 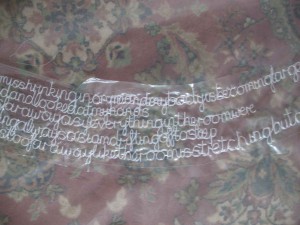 I have my 4 layers of sheer poly voile with black circles painted on. This is the top layer – the one with the smallest circle, and I have stitched words from the experiences of people suffering from Alice in Wonderland syndrome. These are the conscious thoughts on the white fabric. 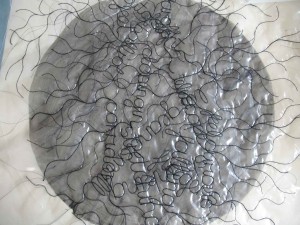 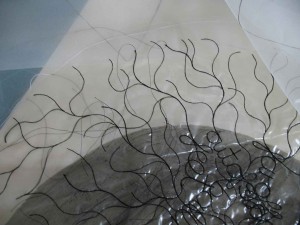 And this is the second layer. This has a jumble of words that appear in both the book, and the descriptions of the symptoms of the syndrome. This time black stitching on the black areas and extending out to the edges of where the circle on the third layer ends – with me so far? These represent the unconscious thoughts.

I have finally had the nerve to soak off the dissolvable fabric which would seem to suggest that the stitching is finished on the voile. The layers turned out very well but the edges of one appear to have distorted a little so my tacked edge is no longer a rectangle – no quick cutting after all!

So the plan is to attach the loose words made from machine lace techniques (stabilised with some invisible threads running along the length so the letters dont fall apart!) to the back of the first layer at the end of the lines of text, disappearing down into the second layer and then coming back up as the words from Alice.

This is the bit I have not completed yet but I have taken some snaps with some text pinned in place to give an idea of what it will look like. 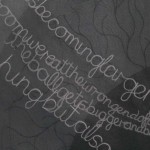 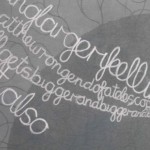 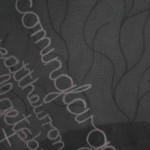 Next stop – an expert with acrylic to help me get it mounted in the way I want – with at least 1″ gaps between each layer hanging from thin clear battens slotted into a pair of brackets.